The Angelfish family; Pomacanthidae are known for their stunning colors, patterns and for being intelligent and feisty fish who know how to dominate an aquarium.

Here are my top tips for Angelfish keeping, including how to choose and house one correctly


These fish are often selected as the central focus of an aquarium due to their striking coloration and interesting personalities. They are also some of the only fish where the juvenile hues and patterns will be markedly different from the adult form, this means the young fish you purchase may end up looking entirely different when it grows up. The Angelfish I recommend for aquariums

Let’s face it most Angelfish look amazing and they are expensive fish. Some of them have dismal survival rates in captive systems and others do really well in aquariums.

These are the  ONLY genuses I recommend:

1.  Centropyge species: The dwarf or pygmy Angelfish. This genus is good for smaller tank sizes and are mostly algae eating.

2. Chaetodontoplus species: semi-aggressive, pricy and some species can be quite challenging to keep thriving. An example is the relatively easy to keep Scribbled Angelfish: Chaetodontoplus duboulayi The Scribbled Angelfish is now able to be captive bred!

3. Pomacanthus species: these are big Angelfish and need a lot of room This genus includes my personal favorite the Emperor and the ever popular Koran Angelfish.

4. Holacanthus species: Holacanthus Angelfish keeping is definitely the best bet for home aquariums, these Angelfish are robust and have a very good survival rate, especially when they are fed plenty of greens. The most popular is the Queen Angelfish. 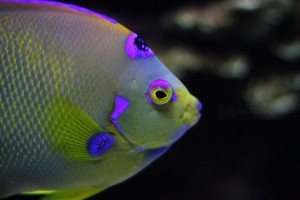 How to select your Angelfish specimen

Angelfish are some of the most expensive fish sold, so do your homework on the species you want and learn to choose a good example.

How to house your Angel correctly

My 4 favourite Angelfish (in order of awesomeness!) and what they need to thrive

The care level of this species is “moderate”, so not for beginners. Longevity of these fish can be an issue as many specimens die due to poor capture, transport, acclimation and nutrition.

This Angelfish looks amazing young and old: the juveniles have amazing circular markings (concentric circles of blue and white on a black body) reminiscent of a Koran angelfish, that completely change as the fish grows to the adult markings of yellow stripes on a blue body with an amazing looking neon blue and black mask.

The emperor Angel grows to about 12 inches (or about 30 cm) in captivity and is quite active so shouldn’t be put in a tank of less than 180 gallons.

This fish, as they live in the reef are often caught with cyanide, so beware of specimens with too bright colours, a dazed appearance and lack of curiosity about their surroundings. Cyanide captured Emperors usually will not last long.

– Keep a single specimen and do not keep with other angels of similar size.

– Mostly feeds on sponges in the wild (is an omnivore) but will feed on Spirulina, marine algae, high-quality angelfish preparations, mysis or frozen shrimp, and other meaty foods.

– Feed with colour enhancing foods as colouration can diminish in captivity.

Emperors may nip on corals but can generally be kept with SPS corals and soft corals.

2. The Majestic Angelfish (Pomacanthus navachus): Also known as the Blue Girdled Angelfish this stunning Angel is found around Indonesia, the Philippines, and the Great Barrier Reef.

It grows up to 30cm (12 inches) and is often smaller when raised in your tank it should be housed in at least 180 gallons.

It sports yellow scales with blue outlines and has a blue “girdle” around its head outlined with electric blue.

The majestic Angel will swim around the rocks and occasionally the open water. Can be territorial but not overly aggressive.

It is a hardy species that needs a widely varied diet including vegetable matter and meaty foods. It is not reef safe (nips at LPS and soft corals) but is one of the most hardy Angelfish around.

The Majestic Angelfish is rather majestic!

3. Blueface Angelfish (Pomacanthus xanthometopon): To me this Angelfish has a look like its face is made from electric circuitry! Found in the Indian ocean, Maldives and tropical Pacific. It grows to 40cm (16 inches) and will swim around the rocks and open water. Keep one per tank in a tank bigger than 200 gallons with a lot of hiding places and live rock.

Blueface’s have a large personality and will dominate the aquarium. Keep with hardy species that can handle its aggression, in a tank with stable, excellent water quality and no corals you don’t want it to nip at.

Again this Angels diet should consist of greens like Spirulina, marine algae and meaty food like chopped clams and shrimp.

4. The Flame Dwarf Angelfish (Centropyge loricula): This vibrantly coloured (like flame) dwarf Angelfish is found in the tropical Pacific, males grow to 15cm (6 inches) and females to 10cm (4 inches). This Angelfish is probably the most popular of the lot with about 5000 being collected every year!

They should be kept in a tank of 30 gallons or bigger with lots of hiding place and rocks for grazing algae off. It is not reef safe and like most Angels will nip at corals.

Keep one or a pair. The Flame Angel will swim around the rocks when young, and as it matures it will swim in the open water and can even dominate the tank. Can be aggressive to other fish of a similar size and don’t usually bother smaller fish. Keep with fish that look quite different to it.

Again this Angels diet should consist of greens like Spirulina, marine algae and meaty food like chopped clams and shrimp.

This post should help to reenforce the true appeal and challenges in keeping examples of the most beautiful fish family in the world.

If you choose a healthy specimen, feed it properly and look after it well you should have a loyal pet that shines in the spotlight for a long time to come.